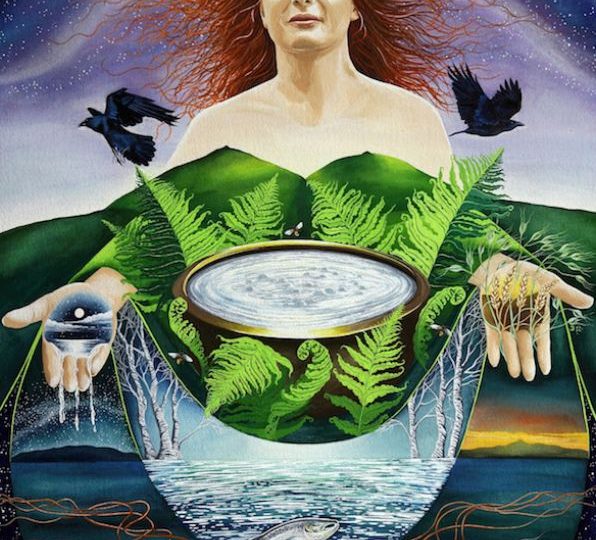 “Summer’s lease hath all too short a date,” wrote Shakespeare in Sonnet 18. To me summer seems to surge forth at a gallop when Lammas or Lughnasa (loo-nuss-uh) arrives. We are half way to autumn. When winter reaches its mid-point, I moan, six weeks more, but at this point in summer I want to tug the sun back as it charges ahead heedless of my pleas. How dare the staghorn sumac leaves turn red! Was it not yesterday they came into leaf? Gratitude, I remind myself, is the watch word of this season of abundance. But I stub my toe on life’s impermanence with a sigh as the sun goes dancing on.

This morning’s quote from the “We Croak” app, was a question by Pema Chodron, “Since death is certain, but the time of death is uncertain, what is the most important thing?” To me this is a reminder to live fully in the moment, even though the day is damp, rain imminent, my to-do list too long, and summer scudding away faster than clouds in a brisk wind. The only thing that is certain is the precious moment here and now.

In Ireland one way to celebrate Lughnasa, this cross-quarter day between summer solstice and fall equinox, is by making pilgrimages to wells. Folklorist Máire MacNeill in her book The Festival of Lughnasa describes one such celebration in the village of Cullen in County Cork. The village and its surrounding towns have legends about three sisters who once lived in Cullen and were holy women. The two older sisters went to neighboring parishes and the youngest, Lateerin, stayed in Cullen. Each sister lived in a holy cell and became the patron saint of her parish.

Every morning, Lateerin went to the local smith for an ember which she carried home in her apron. One day, the smith complimented her beautiful feet. In the second that it took for her to glance up at him with a smile, the ember burned a hole in her apron. As her clothes caught fire, she cursed the smith saying that a smith’s anvil should never again be heard in Cullen.  Some say a heart shaped stone appeared at the spot where Lateerin either burned or escaped underground. After this incident, all three sisters went down into the ground and wells sprang up where they disappeared.

The Lughnasa fair in Cullen is held on the Sunday closest to July 25, Lateerin’s Feast Day. At her well, an elder distributes water to be drunk on the spot or carried home in bottles and instructs people on how to circle the well as they offer prayers and curtsey at the heart-shaped stone to honor the saint. Once their rounds are made, people go into the village to join the throng of merrymakers to eat, drink, dance and enjoy the fair.

On this day too, calves are sold, and cows taken to graze up on a mountain near the iconic hills known as the Paps of Anu. Anu or Danu’s presence in the land harkens back to the one of the oldest layers of myth, she is an epiphany of the Neolithic goddess of life, death, and regeneration. Cairns stand on top of each of the twin hills positioned as nipples on the breasts of the goddess. She represents the fertility of the land, especially at Lughnasa, but harvest is double-edged. The crops fall to feed the people so that the cycle of life will continue. Anu’s Paps nurture both the living and the dead. Pilgrims to the Paps of Anu, circle the well of Lateerin’s second sister, Red Claw. Her name is a reference to the bloody claw of a carrion eating bird. After the harvest when the land lies fallow, the bounty from Anu’s breasts flows into the earth to nurture the seed and prepare for rebirth.

As we mark the half way point of summer, let us drink deep from the well of ancestral wisdom and perform our rounds. As crones or elders, we are links between the past and the future. It is our role to mentor the young and pass on cultural traditions. How does this water from eternal springs connect us to the past and provide us with new visions?

The well becomes the still point in the center around which we move. In the words of T. S. Eliot: “At the still point of the turning world …. There the dance is, / But neither arrest nor movement …. Except for the point, the still point, / There would be no dance, and there is only the dance” (“Burnt Norton”).

Since we must die, but do not know when, let us open our hearts, minds, senses, and spirits to live fully in this ever present now—the still point where endings and beginnings meet. The dance of life is greater than any one of us and yet we are all a part of it and it of us. Hurrah for the dance!

Do something fun in which you can lose your sense of time and live truly without thought of past or future in the pregnant possibility of now. Open your heart and senses—dance, create art, hike, canoe, garden–find your bliss and embrace it.
lammas