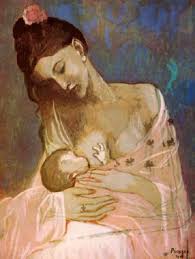 Long, sunny days shrilled by the rise and fall of the cicada’s hum carry us from July into August. The first day of August marks the half-way point between the summer solstice and the fall equinox. The ancient Celts named this day Lughnasa (loo-na-sah), after Lugh (loo) a powerful god of many skills that the Romans associated with Mercury. As legend goes, Lugh declared that a festival should be held to celebrate the beginning of the harvest at the tomb of his foster mother, Tailtiu (tel’ tū – ā), an ancient earth goddess. This area known as Teltown in County Meath is one of Ireland’s most ancient ceremonial landscapes.

The Goddess as Birth Giver is honored now. Stories as ancient as the hills, unearthed from layered legends, suggest that this time has long been consecrated to honor the pregnant earth which labors to bring forth sustenance for her people. Within historical memory this day, often the Sunday nearest August 1, has been set aside for festivities to give thanks for the first sheaf of grain to be harvested. In the Christian tradition, the grain is baked into a loaf for a loaf-mass or Lammas communion. It is moment of grace, a pause, before the long back-breaking work of bringing in the sheaves begins.

In Northern Ireland the horse goddess Macha is associated with this holiday. She came in human form to be the wife of a lonely farmer. He bragged about her at the Lughnasa assembly in Ulster saying she could run faster than the king’s horses. The king demanded that she prove it even though she was about to give birth. Macha’s speed was no idle boast. She was first to cross the finish line where she promptly gave birth to twins. Leaving the boy behind, she took the girl and fled back to fairyland, but not before cursing the men of Ulster with the same suffering and humiliation they had caused her. Whenever their territory was threatened, the Ulstermen were unable to defend their homes because they were laid low with birth pangs for nine days.

Unless we are raising our own food in gardens or on farms, the perils of this season such as—drought, flood, fire, and insect damage—may pass us by. We thrill to the abundance in the produce section of the grocery store or in the stalls at our local farmer’s market. But the heat wave decimating the barley crop in the UK, wild fires burning in Sweden, Oregon, and California, and record-breaking temperatures in Finland and other parts of northern Europe put us on notice. Climate change is shaking up this world; mother Gaia is fighting back.

A traditional part of Lughnasa celebrations involves climbing hills or mountains to make an offering of first fruits, picking wild berries, and dancing until twilight. Often a natural rock formation on the hill top creates a seat to be shared by courting couples. Spellick Hill in County Armagh in Northern Ireland, boasts such a seat named after the Celtic crone goddess, the Cally Berry. She is said to live deep inside the neighboring mountain of Slieve Gullion (sleeve gall’ en) near the summit of which archaeologists have found a Neolithic tomb aligned with the winter solstice.

The divine spirit – sometimes conceived of as a goddess—lives within each of us. Goddess iconography is encoded in the land in sacred mountains and chambered tombs. All people today are called to be the care takers and defenders of the Goddess of the Land.

Collectively we women are the goddess: the crone in the mountain, the mother laboring to give birth, the giddy young girl picking berries on the hillside within finger-touching distance of her first crush. All these aspects are within us. Grounded in the wisdom of a long life, we enjoy the fullness of this moment, this slowly unfolding day, and as evening falls, we still wish upon the first star with a desire to shape what is to come. In her poem, “The Summer Day,” Mary Oliver reminds us of the importance of enjoying moments of idle blessedness in which we are open to the wonder of observing life around us. In the sanctuary of your heart, take time to answer Oliver’s resounding question, “Tell me, what it is you plan to do with your one wild and precious life?”

We never know how much of life remains to us. While young the horizon seems endless, while old it seems to be a shore coming closer and closer into view. Nevertheless, perhaps it is time to plow the ground of our consciousness and seed it with the hope of a second harvest through which we continue to fulfill our potential and enlarge the earth’s store of positive energy. We might ask ourselves, what talents, abilities, and knowledge are we called to bring forth into the world now?

Lammas blessings to all,
Melody

What gifts is the divine manifesting through you?

I am a child of the divine spirit in whom is made manifest the gifts of writing, teaching, cooking, storytelling, collage-making, deep-listening, homemaking, loving, nurturing the young, tending the sick, and closing the eyes of the dead.